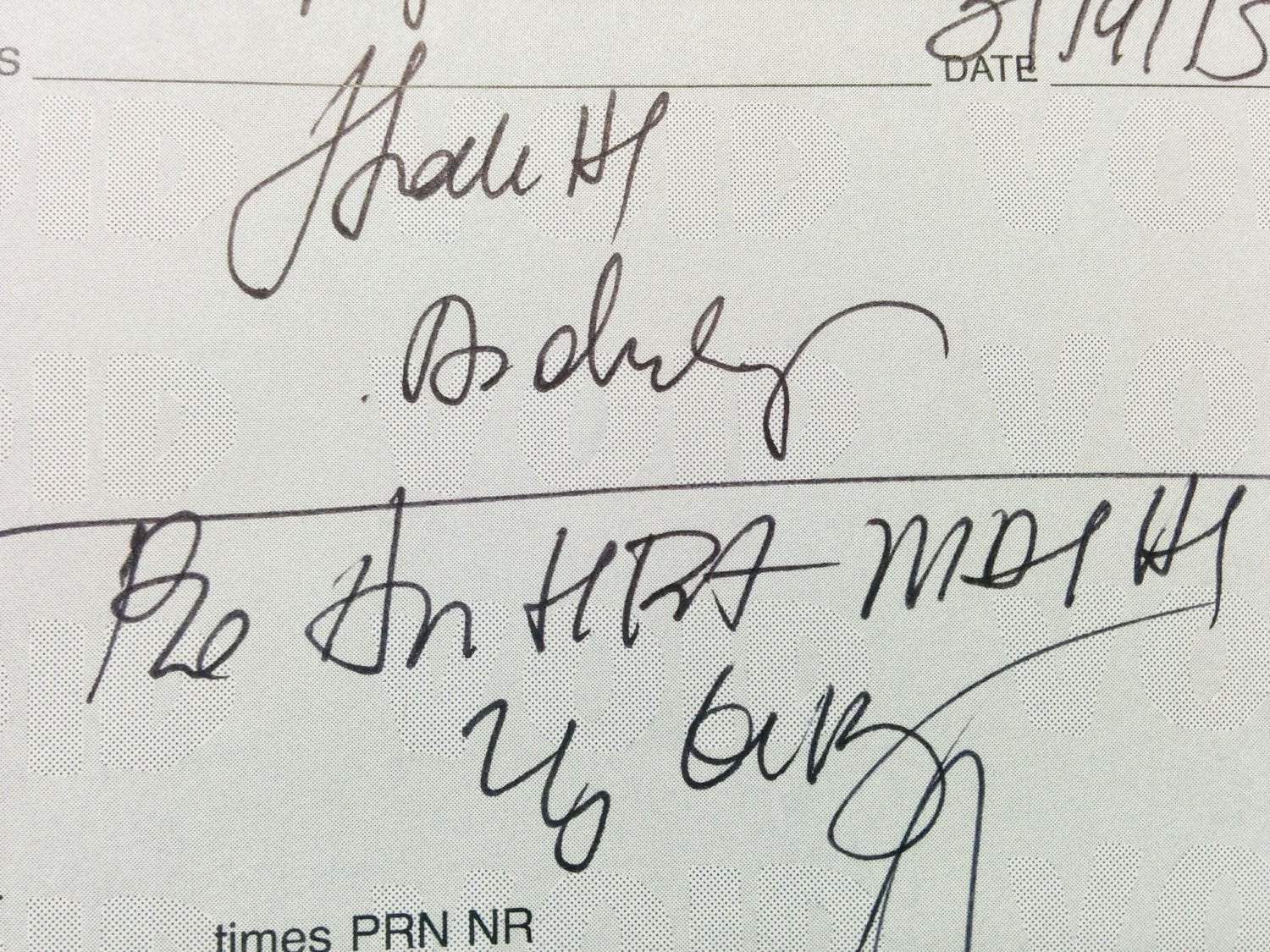 Computers began to be adopted in medical practices with the goals of increasing effectiveness, efficiency, and safety. The idea was that clinical practice would use computer messages rather than unreadable handwriting on paper.

The need for controlled medical vocabularies became obvious with the need to standardize a huge number of computer-based clinical systems.

For example, electronic systems would contain a standardized representation of all prescribable drugs so that physicians and pharmacists could exchange prescriptions consistently and without ambiguity.

The necessity of controlled vocabularies resulted in a number of academic hospitals creating their own vocabularies. Over time, many of these site-specific vocabularies became bloated, full of redundancies and inconsistencies.

To remedy the limitations of previous work and allow interoperability, high-quality and well-maintained standardized vocabularies were needed. In 1998, Dr. James Cimino published a paper describing 12 desirable characteristics of controlled medical vocabulariesCimino JJ. Methods of Information in Medicine. 1998;37(04/05):394-403. doi:10.1055/s-0038-1634558 . His requirements were intended to guide developers and have been realized in a number of standardization projects.

Each of these points is covered individually below.

One of the challenges in creating medical vocabularies is to comprehensively cover the domain of interest. Several approaches to this challenge are possible.

First, a vocabulary could add terms when needed. This requires that users be able to suggest new terms and developers respond to suggestions.

Second, a vocabulary could create all possible terms in advance. In medical vocabularies, this would mean, for example, creating all variants of all possible disease as terms in the vocabulary.

Third, a small number of necessary terms could be provided which users piece together to represent a meaning. This approach is known as post-coordinationPost-coordination can be contrasted with pre-coordination, the inclusion of higher-level concepts in a vocabulary. The first and second approaches mentioned here are examples of pre-coordination. .

Regardless of which approach is taken, a high-quality controlled medical vocabulary should be as comprehensive as possible and use a defined method for adding missing terms.

Concept orientation means that items in the vocabulary correspond to a particular meaning.

As an example, the term Non-A, Non-B Hepatitis is not in current medical use. However, Hepatitis C is not equivalent to the archaic term. Some patients previously coded with the archaic term have Hepatitis C, so it is a child concept of the archaic concept.
(Image: Cimino JJ. Symbolic Methods slides. Lecture given 2019-09-17.)

Once created, concepts should never be deleted. Unnecessary concepts can be indicated as such, but a concept’s meaning cannot change. Concept permanence is important so that previous knowledge can be interpreted unambiguously.

Every concept in a vocabulary should have a unique identifier.

Concepts, as such, are not equivalent to specific words or phrases. The words or phrases used to refer to a concept can change while the concept’s meaning does not. Therefore, a concept’s name should not be chosen as its identifier.

Medical concepts are inherently ill-suited for classification using a strict hierarchy. Many concepts could equally well be classified into multiple, distinct categories. Rather than having redundant concepts as children of separate parents, a polyhierarchy allows a single concept to have multiple parents.

Polyhierarchy accurately captures the richness of medical knowledge in a way that would be impossible in a strict hierarchy without redundant concepts.

Formal definitions are structured concept definitions in relation to other concepts in a vocabulary. Cimino gives the following example of a formal disease definition:

Concepts including “not elsewhere classified” (“NEC”) should not be included in high-quality controlled medical vocabularies. Such concepts cannot have formal definitions except as the negation of other concepts. 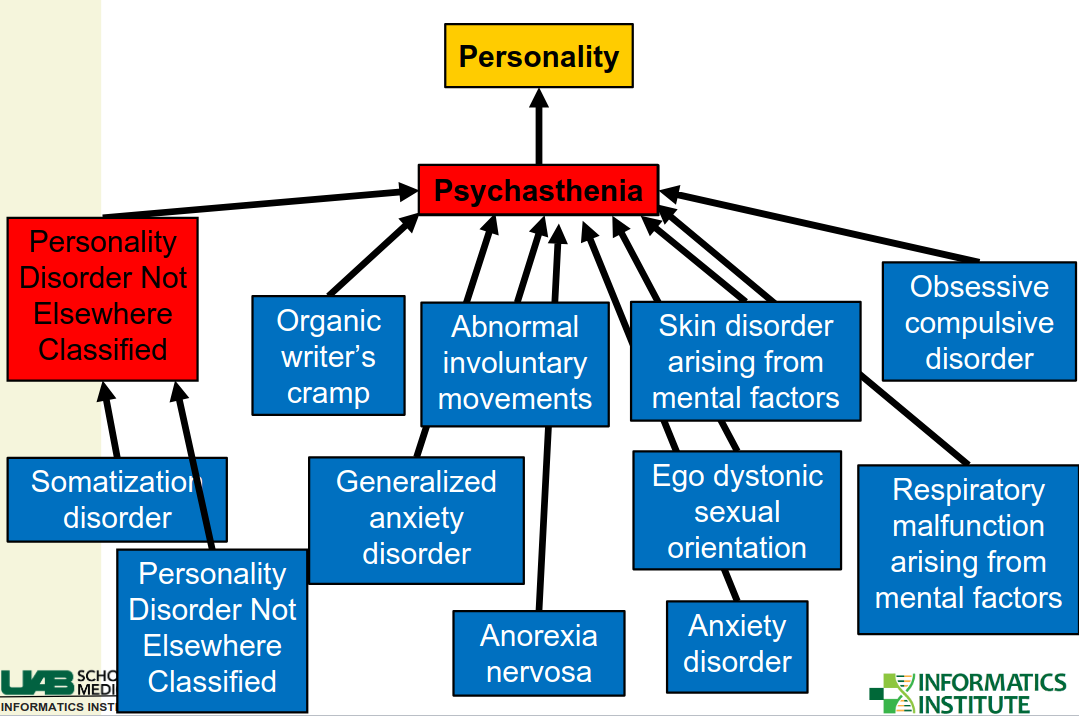 NEC terms correspond to a number of different meanings. To add new concepts that correspond to meanings subsumed in an NEC term, concept permanence requires that one make the new concept a child of the NEC term. However, to retain consistency, then, a new NEC term should be added a sibling of the added term. This process does not have any logical stopping criteria, so the careful use of NEC terms would create endless branches with new NEC terms and single sub-categorizations.

Medical vocabularies are used by many people for different purposes. A multipurpose vocabulary should have levels of granularity that are appropriate for multiple tasks.

A high degree of specificity may be required for highly specialized tasks, while such granularity might be cumbersome for a more general task. A reusable vocabulary that supports multiple tasks should therefore have multiple levels of granularity.

Consistent granularity is also important. For example, if multiple paths lead to a concept, then these paths should be of equal length.

For example, if a medical record system allows providers to enter diagnoses using a vocabulary, it may be desirable to restrict the visible concepts or relationships.

Additionally, if a polyhierarchy is artificially split for viewing in different contexts, the resulting redundant concepts must be identical.

Contextual knowledge refers to the circumstances in which terms appear or come to appear. For example, a single diagnosis code in a patient record alone lacks context. Information about when a diagnosis was recorded, such as an episode of care within a patient encounter makes the information more comprehensive.

One way to implement contextualization is by adding new, circumstance-describing terms to the vocabulary itself.

Ideas we previously discussed are also relevant here. Changes made to a vocabulary should maintain conformance to principles like concept permanence, nonredundancy, nonambiguity, nonvagueness.

In short, graceful evolution means that changes shouldn’t violate the other desidera.

Redundancy is when multiple concepts correspond to the same meaningConcepts must not overlap. But concepts can have attributes such as synonyms, translations, and abbreviations. Synonyms are very helpful, but they should map to non-redundant concepts. . While it may seem like redundancy could be avoided by being very careful when creating new terms, redundancy can be an inevitable consequence of evolution.

Formal concept definitions allow introduced redundancies to be recognized. For example, a newly-introduced pre-coordinated term should be defined using the concepts used to represent it using post-coordination.